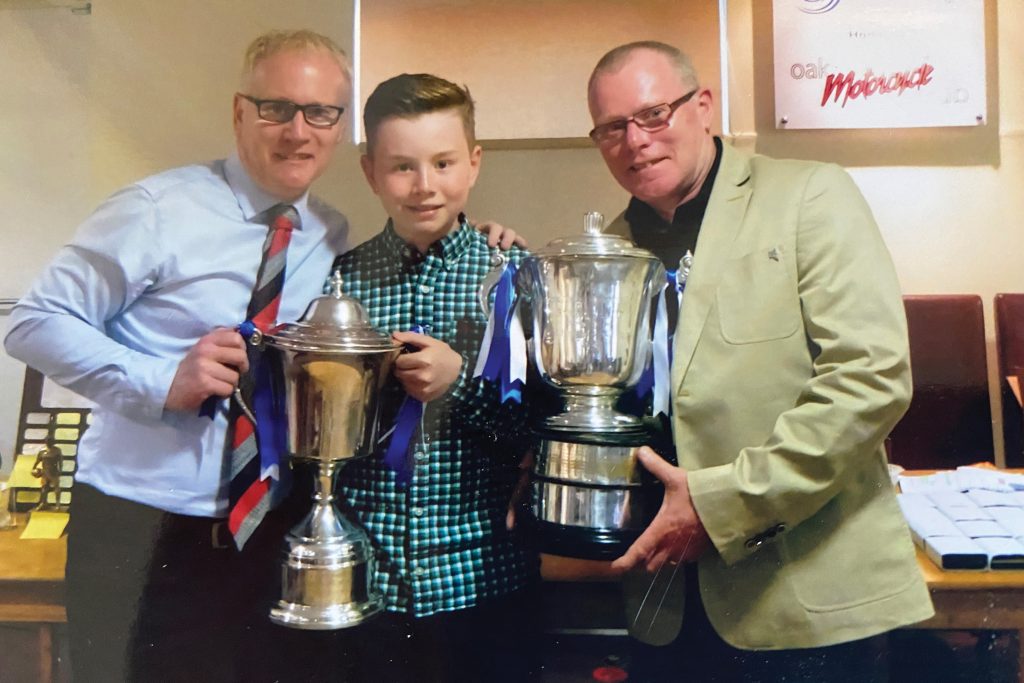 We caught up with Neil Worker and asked him some questions on all things AFC Oakley.

What is your footballing background?
On Saturdays I played for Rushden Town, Stamford, St.Neots and spent my best years at Cogenhoe United.

I played one season in Beds Prem for Elstow at the tail end…. before my heart just wasn’t it it anymore.
On Sundays I played at Oakley, but also played for Sharnbrook and Park Eagles.
Believe me, Sunday was a tough league back in the 90s…. Ask Martin Cox!
I’m glad to say I won a few trophies along the way & played with some amazing players who remain friends.

I played Saturday, most Sundays, Tuesday and trained on Thursdays for about 20 years….. often travelling long distances …. that is a shift and explains the receding hairline!

What is your Oaks story?
Being an Oakley lad I started playing youth football here and then for Oakley Rangers on Sundays with my two older brothers Richard and Jamie. The Saturday side at Clapham Sports were good, but after several years it wasn’t until Chancey got involved about ten years ago that things progressed. He built a good squad and I watched the odd game. After a couple of seasons, and as we are best buddies (most say I am the good-looking one), he asked for some help. He wanted a more attractive team photo and I was the chosen one (probably to buy his beers really) and became his Assistant.
In that 2012/13 season we were rightfully Runners Up to Caldecote by a point as they dominated, but won the Britannia Cup.
Gaz moved on to manage elsewhere so I apprehensively took over the reins for the 2013-14 season, with Paolo as Assistant. It was an opportunity to be involved with my brother Jamie (the only honest Lino in the league – he used to drive me mad!) and bring my Son James to matches….. memories I’ll always cherish.
I only needed to make a few changes in approach as Gary had done the hard graft, but a couple of key defensive signings (Robbie in particular) and making DK Skipper meant we won Oaks first league title.
Gaz then came back after a year away and the love-affair was rekindled. We reached the County Cup final, won the Brittania Cup again and also the double in 2015-16. Great times!
I also managed the league Rep team which was a good experience – with many Oaks players included.
I ran out of steam and happily stepped away in 2017.
Why do you think you had so much success?
It’s all about the players. Players know players and success will attract more.  Gary & I both tried to raise standards on and off the pitch. We had a knowledge of each opposition, a clear formation so our lads knew their position and how each fitted.
To improve in between seasons, we tried to bring at least two new players and also bring younger legs into the squad where possible. Reuben and Elijah being possibly the best examples. I strongly believe the sides who have 18-20 year olds in and around will win things.
A tough pre-season against higher grade opposition always ensured we made a good start in the league.
My personal approach to management was perhaps too serious (but never angry – much!)….  I spoke frequently with my Skipper (DK) to ensure all had the same commitment and he was critical to our success in what was a competitive few years with lots of players now playing at a higher level!
I reflected on my experiences as a player. It led to a club ‘atmosphere’ that was organised before games, demanding on the pitch, but was equally social and enjoyable off it – and I’m glad to see that endures today. This encourages parents, family & fans to come and watch, join us in the bar and feel part of it all… That potion isn’t unique, but difficult to get right, but drove success and remains the ethos of ‘the Oaks’.
What is your prediction for Oaks this year?
I think Oaks will be in the mix – so a top 4 finish should be achievable with ease alongside a cup final (please).
What are your three non-negotiables in a player?
Commitment, honesty and enjoyment.
(Incl. an appetite for gambling, beer and rum).
What makes Oaks great?
Oaks players are ‘gentlemen’…. we don’t invite dicks to play for the Oaks. Most importantly, forget about the past (that’s for another day), keep looking forward and make sure the future is a successful one.
Your top three Oaks players of all time?
Mark ‘Smudger’ Smith (8/10 every week and best player on every level), Jack Goodacre (Turn up when you like) and Elijah Hukin (despite being made of glass).
I could have selected any one of about six lads that are still playing tbh, (so I’ll save their blushes and not pamper them).
Oaks have loyal men at the heart of the club such as Batts, Coxy, Carl and Rippers….. all outstanding players in their own right.
However I have to mention Robbie Alder who has played consistently well and made all the difference since joining us. DK and him keep the Oaks strong and with Rhys coaching, I’m so pleased that Oakley people are now ‘in-charge’ alongside Ray & Bod with the Dev side.
What advice would you give to your 18 year old self?
1. Stay in on Friday nights.
2. Never become a Manager.
3. Do not invite George Cox around for a few beers on New Years Eve.
#COYO